So, you just received a dividend cheque? Don’t spend it. Reinvest it.

Plenty of research (link, link, link) shows that reinvesting dividends is a winning investment strategy. Reinvesting is using your dividends to purchase additional shares in counters you currently hold. There are several excellent reasons for doing this.

First, reinvesting dividends supercharges your returns. This is due to the incredible power of compound interest. Don’t be fooled by the seemingly small dividend yield (the amount of the dividend divided by the price of the share, typically about 2-5%). Even a 2% yield, if compounded yearly and added to the market gains, will grow your returns much faster than if you spent your dividends.

Second, reinvesting dividends in market slumps cushions your losses. Say company XYZ issues a Ksh 1 dividend when its share price is Ksh 20. That’s a 5% yield. If the price of XYZ falls to Ksh 12, and XYZ maintains the dividend at Ksh 1, the yield has increased to 8%. You thus get a higher return during market slumps, due to the inverse relationship between yield and price. In addition, this higher yield partially offsets the losses due to the market slump.

The real power of reinvesting dividends is best explained graphically. 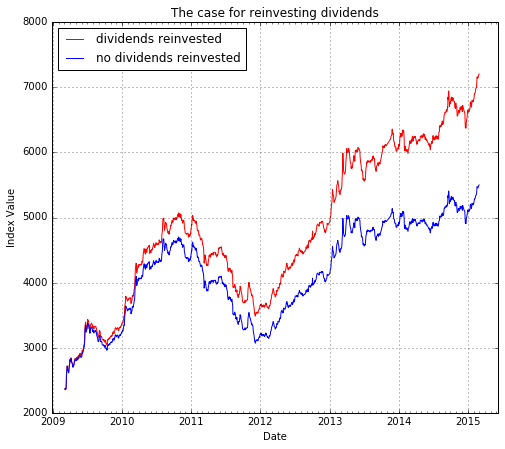 In the figure, the blue line shows the NSE20 index, without dividends reinvested. An ending value of 5499 in March 2015, from a starting value of 2360 in March 2009, represents a 133% return over the 6 years. In contrast, the red line shows the results of reinvesting dividends {1}. With reinvesting, the same starting value of 2360 yields a hypothetical ending value of 7210, which is a 206% return over the period. Comparing the returns in the two cases exposes the power of reinvested dividends: the investor’s total return increased from 133% to 206%. In annualized terms, the returns rose from 15% to 20% per annum.

This is the gist: don’t spend your dividend cheque. Reinvest it.

{1} Adding all dividends received during the year by the valuation at the end of the year gives an average annual dividend yield of 4.5%.